An early start to the season

We have a boat in already and it is not even mid-April!!

Read more: An early start to the season

A message from the Chairman Shane Cleaver:-
As you will know the Committee has been working hard to ensure that we put the Gravesend Regatta on a secure footing. To make sure the Regatta continues one of the longest and proudest traditions of Gravesend. With the success of our bid to the Charity Commission to form the Gravesend Regatta Society charity we now need to move to the next stage of this process. As per the constitution, we need to formally dissolve the old Gravesend Regatta Committee and host the first AGM of the new Gravesend Regatta Society, to adopt the new constitution, elect our Trustees and Committee and take on the liabilities assets and responsibilities of the old committee.
This is, therefore, the formal notice as per the constitution calling an Extraordinary General Meeting of the Gravesend Regatta Committee for all Committee Members and all Members. This will take place on:
Monday 18th March 7.30pm
Council Chamber - Civic Centre, Windmill Street, Gravesend, Kent, DA12 1AU
Subject to a positive vote on the motion the cessation and transfer of responsibilities, duties and assets, the AGM of the new Gravesend Regatta Society will then take place on the demise of the old Committee which is anticipated no later than 7.50pm on the same night at the same venue.
An agenda for the evening will follow in due course.
We look forward to you joining us on this historic occasion as we mark the transition to a new era for the Regatta to ensure it remains part of the fabric of Gravesend for years to come.

As you will probably know, Ian Stevenson will standing down as chairman at the meeting. He has led the Regatta Committee for over forty years and has played a major part in the running of the regattas during that part. He will be sorely missed. Furthermore Mike Fitzsimons is standing down as treasurer and again he has undertaken much of the work of running the regatta in his period of involvement in the Committee. The election of the officers and members of the Committee will be a key part of the business of the AGM.

A proposal to transform the Committee into a Society together with some enabling amendments to the present Constitution will also be put to the meeting.

The present constitution of the Society has a number of serious defects that needed to be rectified. A small working part was set up to look at what changes might be made to make it fit for purpose. The success of the Gravesend Fixed Seat Rowing Club led to the current proposal, endorsed by the Committee, that a Society be set up with members to run fixed seat rowing and the Regatta at Gravesend. The membership would be open to all with a few exceptions. The membership would elect the Committee to run the organisation. We believe that there is considerable potential to increase the membership over that of the present fixed seat rowing club and that this will lead to an increase in the numbers taking part in the regattas. The management of rowing in the evening and weekend sessions will be enhanced with the aim of setting up a system where boats can be booked in advance so that they can be made available for immediate use when people arrive at the slipway. At present the Committee and the Gravesend Fixed Seat Rowing Club do not have limited liability. This leaves members potentially liable for large claims that are in no way due to any fault of theirs. A constitution for a Charitable Incorporated Organisation that uses a model document published by the Charity Commission and would have the benefit of limited liability has been put together for the proposed Society and this will be put to the Annual General Meeting of the Committee this month. Being registered by the Charity Commission will considerably increase the potential to raise sponsorship and also have tax advantages. For example membership fees could be subject to Gift-Aid if the individual member agrees which would increase the income from each subscription by 25%. Provided that the resolution to set up the Society is approved by the AGM and the application to the Charity Commissioners is submitted immediately afterwards there is a realistic prospect of it being set up before rowing commences in the spring.

We would urge you to support the setting up of the Society.

The Committee has agreed a strategy to take these proposals to regenerate the Regatta and fixed seat rowing at Gravesend. forward. The key part of this is for the Society to be organised with a group of role-holders each of whom will be responsible for an area of work. These role-holders will develop their strategies for making the Society a success under the overall supervision of the committee. Provided the Committee considers that their work is being carried out effectively, it would be the intention to give the role-holders as much autonomy as possible.

We have candidates for the roles of Chairman and Treasurer who will be putting themselves forward at the AGM. We also have a Web Master and a person who has agreed to take on the role of Rowing Manager. For most of the roles, it will not be a requirement for them to join the present Committee but once the Society has been set up they would be expected to be members of that.

If you would like further information on any of these roles or if you are interested in taking on one of them, please would you contact me as soon as possible. You will find my contact details on the website. All the roles are important for the running of the organisation. However, it is especially important that a Membership Secretary is appointed early. This role will not only involve managing the membership but will also include the development of a strategy for increasing the membership. We would like to have this in place prior to rowing starting in the Spring with the aim of immediately increasing membership at the beginning of the season. 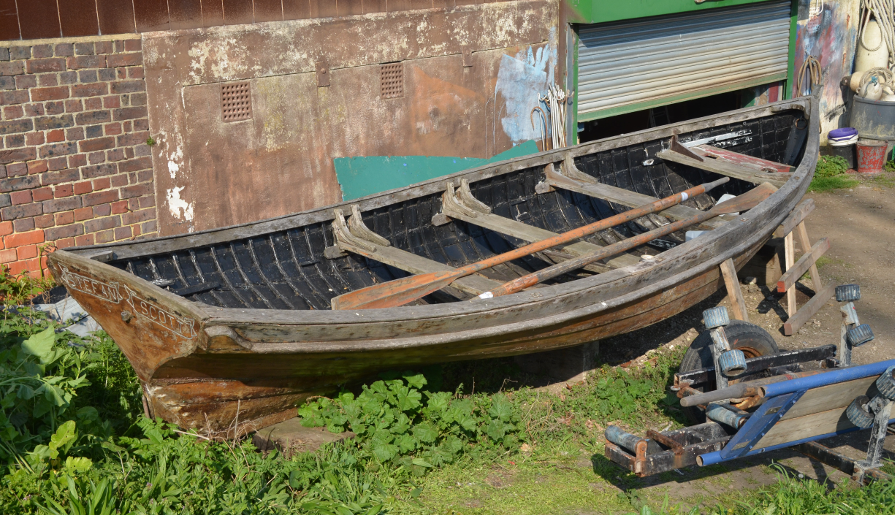 The boats for the skiff races in the regatta were originally the working skiffs of the Gravesend watermen. However, after the war, the watermen used motorboats meaning that the skiffs were taken out of service and were thus not available for regattas. Therefore in 1953 the Regatta Committee had four skiffs built to a matching design by the local barge company, Messrs Woods of Denton. A fifth skiff was built by them a few years later. Eric Mastin, a shipwright and former Mayor of Gravesend who played a major part in the running of the regattas, built a further three. When he died the Committee, lacking the skills and volunteers to maintain the wooden boats, decided to replace them with the present fibreglass Clayton skiffs. Several of the boats were broken up. Two, the Percy Sargent and the Tertius Metcalf, were bought by Edward Sargent and restored. The Committee retained the Stefan Scott but unfortunately it has been allowed to deteriorate and is now in a sorry condition with rotted planks and timbers and with the hull badly distorted. It is the intention of the present Committee that the Stefan Scott should be restored and brought back into use. It has sought an estimate from the distinguished boat-builder Mark Edwards who has built many replicas of traditional Thames boats including the Gloriana, the royal row-barge, to carry out the technically demanding work of replacing planks and ribs. The intention is that a small team of volunteers led by a team leader would undertake the works not requiring very high levels of boat-building skill such as scraping off perished paint and varnish, repainting and making bottom boards and fitting the rowlocks. In the longer term, Edward Sargent has indicated that, provided the Regatta Society can demonstrate that it is capable of looking after the wooden boats properly, he would be prepared to donate his two wooden boats. 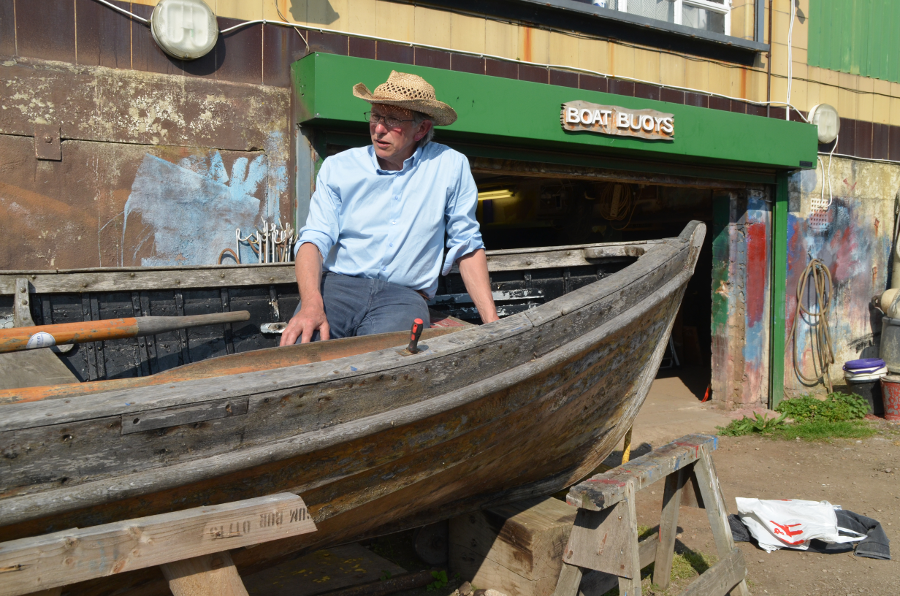 Mark Edwards inspecting the Stefan Scott in the Spring of 2017

If you would be interested in taking on the role of Team Leader Wooden Boats, please would you contact me. Shane Cleaver, Committee Member, Gravesend Regatta Committee